Since the evolution of the internet, certain fads have taken off and become so well known that they are now regarded as Internet Memes. In fact, some people will even tell you that you are a true citizen of the Internet if you don’t know their most favourite meme. This is a list of what I consider to be the top 10.

Before starting, this is a brief definition of an Internet meme: An Internet meme is a piece of digital content that spreads rapidly, widely, and organically from person to person on the Internet. The term is a reference to the memes as virus-like self-replicating packet of information. 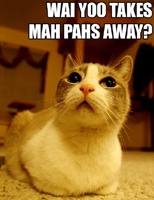 A lolcat (the term is a portmanteau of lol – laughing out loud, and cat) is an image of a cat with an amusing or odd caption. The captions tend to be fairly childlike and usually use text-message like or bad spelling. For example: “Call the offis. I iz gonna be latez”. The caption usually ties in to the image in some way, as you can see from the example above.

This meme is so popular that it has spawned a whole network of websites – the most popular of which is “I can has cheezeburger?” Lolcats now appear frequently in social networking sites and forums.

Visit I can has cheezeburger?

2. All Your Base [Wikipedia] 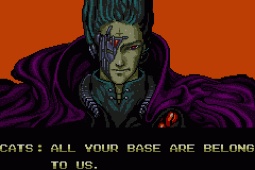 All your base is a phenomenon that started in 2001, with the spread of a flash animation taken from the first moments of a Japanese video game from 1989 called Zero Wing by Toaplan. The popularity of this video comes mostly from the “Engrish” (ie, Japaneseifcation of English) captions contained in the clip. For example: “All your base are belong to us” as opposed to “All your bases belong to us”.

While its popularity has waned a little recently, it is still well known enough that new videos appear on youtube from time to time which play on the meme.

Watch All your Base

First, the image above is not goatse – it is too horrible to include on this page (though there is a link below for your viewing pleasure… erm..) This rather horrible image became very famous when it spread like wildfire through internet forums as trolls would paste a link to it while pretending the link lead to something of interest to the users of the forum. It became such a problem that Slashdot had to modify their code to show where links in article comments were pointing to, to stop people being caught out.

It has enjoyed a recent infamy as it has managed to be shown on CNN (by mistake) and the BBC (albeit in a cartoon form) forums and news program. It was originally found on a site called goatse.cx (which was a play on the word goatsex). It contains an image of a man showing his rear-end in a rather revolting manner.

[WARNING] Click here if you want to see goatse 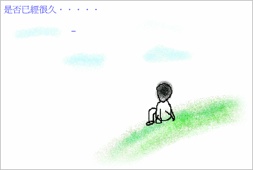 Kikia was the first example of a flash shock site and it unleashed a torrent of shockers that continues to this day. Starting out with a cartoon drawing of a little boy, Chinese writing, and gentle music, the cartoon moves along slowly until you are suddenly shown a hideous animation of a face with a loud scream.

The original kikia was posted on a Taiwanese website Kimo, under the username Netspooky. Many popular images to appear in these screamers are taken from the film The Exorcist. 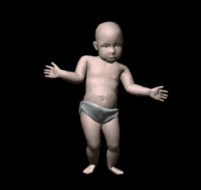 The dancing baby (also known as baby cha-cha) was one of the first Internet memes, originating in 1996. It contains a 3d animation baby and was originally created as a demo for 3d Studio Max. The baby dances to music and appeared frequently on the television programme Ally McBeal – symbolising the main characters ticking biological clock.

Give your friends a gift they’ll never forget with this devastatingly suave Custom Nicolas Cage Pillowcase at Amazon.com! 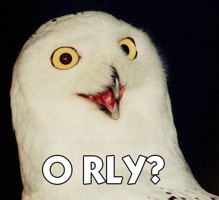 ORLY stands for Oh Really and usually features a snowy owl with the caption “O RLY?” – this is often followed by a YA RLY response. It can frequently lead to a whole conversation using Internet slang. It was first seen as early as August 2003 on the Something Awful forums. The original image was taken by John White and posted to alt.binaries.pictures.animals in 2001.

It became so popular that it even appears in a gameboy advance game. The caption itself is now often found on any photograph, not just photographs of owls.

view a gallery of O RLYs 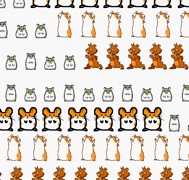 The Hamster Dance is one of the earliest Internet memes, first appearing on Geocities (in its heyday) featuring rows of animated hamsters and rabbits dancing in various ways to a sped-up sample from the song “Whistle Stop” by Roger Miller.

It was designed in 1998 by Canadian art student Deidre LaCarte as part of a competition with her brother to see who could generate the most traffic. It is an homage to her pet hamster Hampton Hamster. Frankly, I think it is rather sinister. 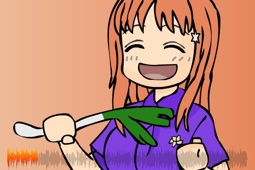 Loituma is one of the most recent Memes to appear on the Internet – first appearing in 2006. The name itself comes from the original band that sang the song popular in the flash clip. The band Loituma is a Finnish quartet utilising traditional singing and instrumental styles from Finnland. In 1997 they were select Ensemble of the Year at the Kaustinen Folk Music Festival.

The first instance of this phenomenon online was a cartoon based shockwave flash animation featuring which consists of a 4-frame animation of the Bleach anime character Orihime Inoue twirling a leek to a 27-second loop from the song. The animation loops continuously. Since then many other examples have come up where the image is replaced with something else – but the song is always the same. 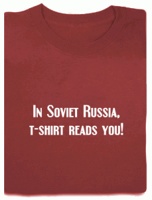 A snowclone is a type of formula-based cliché which uses an old idiom in a new context. It was originally defined as “a multi-use, customizable, instantly recognizable, time-worn, quoted or misquoted phrase or sentence that can be used in an entirely open array of different jokey variants by lazy journalists and writers.

The starwards kid is an Internet phenomenon which started when a video clip recorded by Ghyslain Raza, a fourteen-year-old French Canadian male high school student, was leaked online. The video was filmed at the studio of his high school, and the tape was left forgotten in a basement. The original owner of the videotape discovered his recorded acts and immediately shared it with some friends. Thinking that it would be a funny prank, they encoded it to a WMV file and shared it using the Kazaa peer-to-peer file sharing network.

Within two weeks it had been downloaded several million times. Since then it has been downloaded over 900 million times, making it the most popular viral videos. In July 2003, his parents filed a $250,000 lawsuit against four of his fellow students who settled out of court.

Jamie is the founder of Listverse. He spends his time working on the site, doing research for new lists, and cooking. He is fascinated with all things morbid and bizarre.